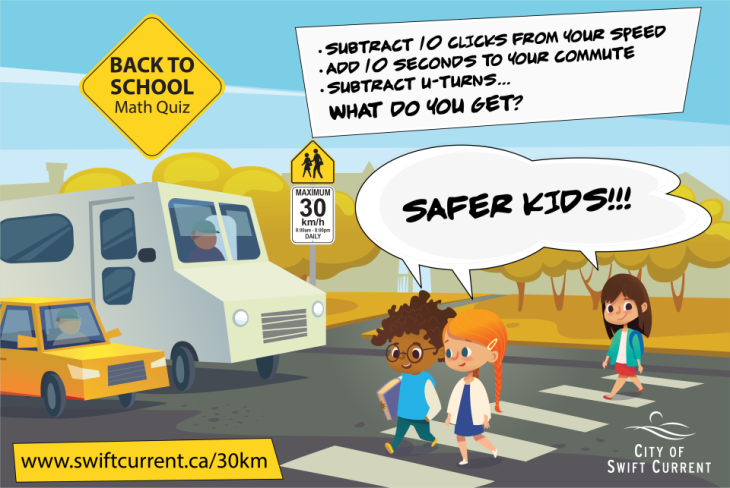 Swift Current City Council, at their regular Council Meeting held on Monday, July 29th, approved a Motion to amend the School Zone and Active Playground Zone Traffic Bylaw to enhance safety in and around schools and playgrounds.

The approved amendments to the Bylaw state that, between the hours of 8:00 AM and 8:00 PM, seven days per week, all motor vehicles traveling within School and Playground Zones will obey a speed limit of 30 km/h and will be prohibited from making U-Turns. The updated Bylaw will go into effect prior to the start of the new school year in September.

The goal of the amended Bylaw is to enhance safety for children in areas of the community that they are frequently present.

Traffic signs indicating the reduced speed limit will begin to be installed in the affected areas of Swift Current throughout August, giving motorists some time to become accustomed to the changes, which will become official on September 1st, 2019.

Signs indicating a speed limit of 50 km/h will also be placed beyond the school and playground zones, alerting motorists that they have exited these areas and can return to their normal rate of speed.

View all of the impacted zones on the map below...